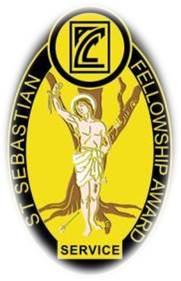 The St Sebastian Fellowship is an award of merit bestowed by the ACC upon any person whose service to the Association or member school has been exceptionally meritorious and long standing. Through their work with ACC sport and in pursuit of its mission, the recipient must exemplify the spirit of St Sebastian; strength, endurance, perseverance, courage and justice. To be considered for nomination an individual must have contributed across numerous facets of the organisation (and been a strong contributor in each area), and have been significantly involved in the development of the organisation. It should be considered that the nominee has completed a minimum of fifteen (15) years service involvement with ACC sport or has made such a contribution as to be deemed ‘exceptional’.

The award should be considered a "life time service to ACC sport award". Preparation of the award nomination should be a school responsibility and not simply left to the current Sports Coordinator to complete. Nominations should be coordinated by the Principal with input from senior management, sport/PE staff (past and present) and the school PR/media officer.

The St Sebastian Fellowship Award can be retrospective and the award bestowed upon individuals who are retired and not currently employed or not actively engaged in ACC activities and events. Years of active service prior to 2013, the year the awards were first introduced, can be counted towards the total service record. Service years can be cumulative across ACC schools/employers.

Recipients of the award will:

The St Sebastian Fellowship Award is acknowledged as superior to all other ACC awards.