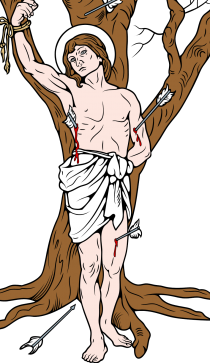 St Sebastian provides a link back to the history and tradition of the Catholic Church. The ACC was formed in 1937 by three Christian Brothers Schools in Perth. Catholic education tradition has always recognized that education of the whole person; spiritual, intellectual, artistic and physical is necessary and vital. The link with St Sebastian, through the ACC award of merit Fellowship is a reminder of our spiritual heritage and the long held view of the importance of mind, body and soul in the development of each person. It also represents a historical and artistic symbol of the ACC maxim; “Sport in the Right Spirit”. The St Sebastian Fellowship award is a fitting recognition to those that have provided exemplary service to ACC sport in the pursuit of educational excellence in the spirit of Christ.

Why is Saint Sebastian the Patron Saint of Sports? St Sebastian is considered to be one of the holy martyrs and an athleta Christi (“champion of Christ and guardian of the heavens”). He is said to have been killed during the Roman emperor Diocletian's persecution of Christians. He is commonly depicted in art and literature tied to a post or tree and shot with arrows. This is the most common artistic depiction of Sebastian; however, he was rescued and healed by Irene of Rome before criticizing the emperor and being clubbed to death. He is venerated in the Roman Catholic and Orthodox Churches. As well as being considered the patron Saint of athletes he was also considered a protector from the bubonic plague, and was formerly one of the Fourteen Holy Helpers. The connection of the martyr shot with arrows with the plague is not an intuitive one, however. In Greco-Roman myth, Apollo, the archer god is the deliverer of pestilence; the figure of Sebastian Christianizes this folkloric association.